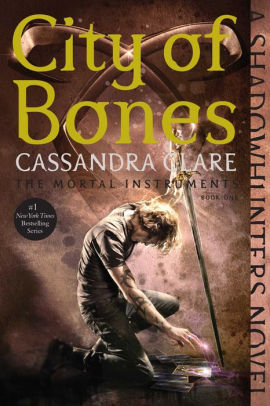 City of Bones is the first of six novels in the Mortal Instruments series.

The Mortal Instruments novels set the scene for Cassandra Clare’s spin off series. In City of Bones, Clary Fray finds out she is a Shadowhunter and that her mother has hidden them in the mundane world to prevent her father finding her and recovering the Mortal Cup.

Clary realises something isn’t right when she starts seeing symbols and witnesses a murder that her mundane friend Simon doesn’t see; she thinks she is going crazy! The Shadowhunters that killed the demon in front of Clary want to know why she can see them when they are cloaked to mundanes.

When demons kidnap Clary’s mother the Shadowhunters want to know why demons would be interested in ordinary mundanes like Clary and her mother? She is then thrust into the world of fairies, werewolves, and demons.

Clary must learn what it is to be a Shadowhunter, a secret tribe of warriors dedicated to ridding the earth of demons, and try to figure out why she has the sight, who has taken her mother, and why?