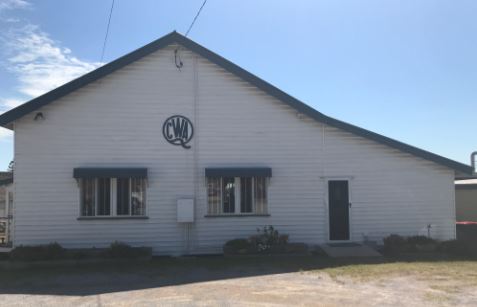 The CWA Hall in Oaka Lane

There has been an incredible amount of interest lately in the “new” CWA. The CWA Journal has received a restyle, re-emerging as the stylish quarterly “Ruth” and in metropolitan areas evening meetings are popping up so working women can attend.

Local branch president, Heather Jensen says the perception of the Country Women’s Association as “old-fashioned” is quite a recent one:

“I joined at age 26 when I first had children,” she said.

A skilled embroiderer, Heather was keen to meet other women to share her skills and learn new techniques but after 42 years of membership, she says she still loves coming to the CWA for the connection and long-term friendships. In addition to crafts and a speakers program, the Gladstone CWA maintains a community garden, with the assistance of local job-seekers.

“That’s when you can come and check us out,” Heather said. “There’s no pressure whatsoever to join. I hate having to dip my hand in my pocket all the time, so I wanted a day when people could come, it’s a beautiful big hall and we’ve been here for 82 years so it would be great to fill it up.

“The way to get to know us is to come on down,” she said.

Keen to attract new members, the Gladstone CWA Hall in Oaka Lane holds “Friendship Days” every Thursday from 10 am until noon.

is counselling cancer patients. She spoke on suicide prevention and awareness, one of the many contemporary topics the CWA present through their speaking program.

Their aim is to “improve the conditions for women and children and make life better for families, especially those living in rural and remote Australia”. Nationally, their “old-fashioned” scone baking and highly successful CWA cookbooks raise hundreds of thousands of dollars annually. They made 72,500 ‘trauma bears’ for kids undergoing procedures in hospitals. They send packages to women in East Timor to help them after childbirth and they raise loads of money for different causes every year.

It’s the largest women’s organisation in Australia with a membership of over 22,000 in over 1,200 branches around the country and they have representatives on over 12 boards nationally including: Consumers Telecommunications Network, Telstra Consumer Council, Australian Competition and Consumer Commission, Consumer Consultative Committee and Australian Communications Industry Forum. The CWA has a long history of achievements and helping to connect women around Australia and to improve the quality of life for women, particularly in rural areas.

In Gladstone they are preparing to celebrate their 95th anniversary and Heather said she’d like to see the membership increase on the way to their centennial.

It’s International Women’s Day in a fortnight, so let’s celebrate being a woman. Bake a scone, run a company, look after your kids, run a marathon or join the CWA! Do whatever you like!