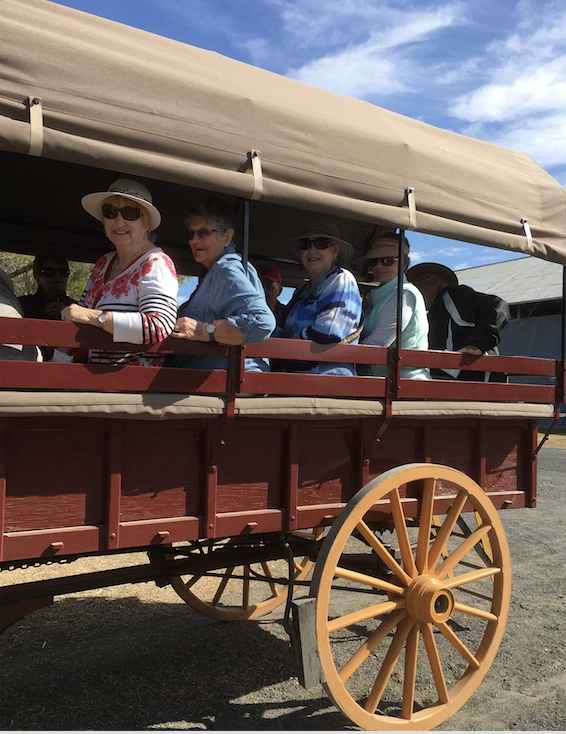 The September general meeting of the Gladstone National Seniors was full of talk of the people who had attended the Carnival of Flowers trip to Toowoomba. There was the usual good roll-up although some of the trippers couldn’t make it, because of the late hour they had arrived home from Toowoomba the night before.

The guest speaker for the meeting was Marlene Nolan from Departure Point who talked on holidays in the Kimberley region and attractions of north-west Western Australia in general. The next meeting is on Tuesday 17th October.

The Gladstone National Seniors at the Toowoomba Carnival of Flowers

Excitement was afoot when over sixty Gladstone National Seniors set off at 5.30am for a four-day, five-night trip to the Toowoomba Carnival of Flowers. The seniors travelled in two buses, arriving at Gin Gin for breakfast and Nanango RSL for lunch.

After reaching the Darling Downs, the buses arrived at the Oakey Army Museum, a must for all aviation and military enthusiasts. This museum houses a vast collection of WW1 and current day military aircraft and interested seniors were enthralled.  On reaching Dalby, the seniors booked into their respective motor inns which were their home for the three nights. The evening meal was at Russell’s Tavern, after which everyone was ready for a little shut-eye.

Expectations were high when on Saturday morning the seniors travelled to Toowoomba to check out the Carnival of Flowers.

As the years passed, the carnival’s appeal widened, attracting tourists from across Queensland, interstate and internationally. Since its inception, the Toowoomba Carnival of Flowers has flourished and, is now, recognised as one of Australia’s best events and has won many Tourism Awards over the years.

The seniors were soon inspecting Toowoomba’s most stunning and tranquil parks, namely, the Japanese Gardens, Laurel Bank Park and Queens Park. The Japanese gardens, a three-hectare site, has a beautiful and peaceful setting. The seniors strolled through, drinking in the magnificent displays of Japanese native trees and plants, combined with continuous and soothing harmony. Laurel Park gardens is designed to cater for all. They have made special concentration on creating some gardens for the visually impaired who can appreciate the strongly scented blooms.

The Queens Park Gardens are just a sea of beautiful garden beds that take in almost every type of flower that will grow in this neck of the woods. Everyone was captivated by the presentations in each of these parks finding the bright flowerbeds, large canopies of stately trees and acres of expansive green lawns, beauty to behold.

After lunch in Ruthven Street, the seniors investigated the shops and visited St Luke’s Flower Art Show. The site of the Anglican Parish Church of St Luke in Toowoomba dates back to the 1850’s when a hall was built to serve as a school during the week and a centre of worship on Sundays. The site was marked by a memorial stone when the St Luke Church was later built.

It was soon time for the seniors to make their way to their seats where they were to watch the renowned Toowoomba Carnival of Flowers Parade. This was a fascinating spectacle and the seniors were engrossed as they observed hundreds of flowery floats go by. There were stilt walkers, old cars, the fire brigades, police force (and other services) and many more. The second day ended with the drive back to Oakey RSL for the evening meal and then to Dalby for some rewarding sleep.

Leaving Dalby the next morning, the seniors headed for Toowoomba but made a detour to the Jondaryan Woolshed. This is a heritage-listed working sheep station and is rich in history that brings back memories of yesteryear. There is plenty of area to walk around and find, not only antiques but also more modern machinery on display. The seniors were particularly keen on riding in the horse-drawn covered wagon and the model railway circuit caught their eye and most took a ride.

The next stop was at the Toowoomba Orchid Society Show, which was held in the St Paul’s Church Hall. This is a vibrant display of native and exotic orchids, bromeliads, ferns and foliage plants and everyone was impressed with the exhibition. This hall has a significant history, especially to Terry Freyling, the President of the Gladstone National Seniors. Terry’s father’s cousins, William (Bill) and Agnes Freyling, left a large legacy to the Church when Bill passed away in the 1970’s.

By 1980 it was determined that this money (which had accumulated much interest) would be used to build a hall beside the church. Extra money was made available by the Lutheran Layman’s League and the hall was opened and operating in January the following year. This was a wonderful donation for the Toowoomba Lutheran community. St Paul’s Lutheran Church beside the hall was open for the inspection of the seniors and this also identifies with Terry’s ancestors.

This church was built in 1957 and it was one of the first to commission a unique and adventuresome use of coloured glass by setting four great panels into the northern wall. The cost of two of these panes of glass was met through the generous donation of a great-aunt of Terry’s.

At this point, a couple of guides from the council came on board the buses and the seniors were off to view the prize-winning gardens. Each one visited had so much going for it, and all were outstanding in their own way.

These passionate gardeners work year-round and they transform these gardens into stunning floral showpieces. The seniors were particularly impressed by the Champion Native Garden which showed so many specular native plants. This garden was alive with bees and birds (honeyeaters) that gathered the nectar from the flowers for their own sustenance.

The Champion garden of the Carnival was a brilliant spectacle that had all one could wish for in a garden as well as a few gimmicks. The seniors had fun with a door that had a sign “open” and when this was done, water squirted out over the unsuspecting onlookers.

The evening meal on this occasion was at Rudd’s Pub at Noddy and the seniors were fascinated by the history of this unique place. This boasts as being the home of Dad and Dave which became an amusing series called “On our selection”. It was a long drive back to Dalby but the day was well worth it.

The next morning everyone was ready to head for home, as they had great memories of the jam-packed interlude they had spent at the Toowoomba Carnival of Flowers.

The trip home wasn’t without interest as the buses wound their way up to the Bunya Mountains.

This is a fascinating place where there is spectacular mountain scenery, views and abundant wildlife. The seniors then made their way down the mountain to Kingaroy where the lunchtime meal was at the RSL and the evening meal was at Gin Gin.

The seniors arrived back in Gladstone just after 8 pm and, although tired, were quite ready to go home and reminisce about the enjoyable trip they had just shared.