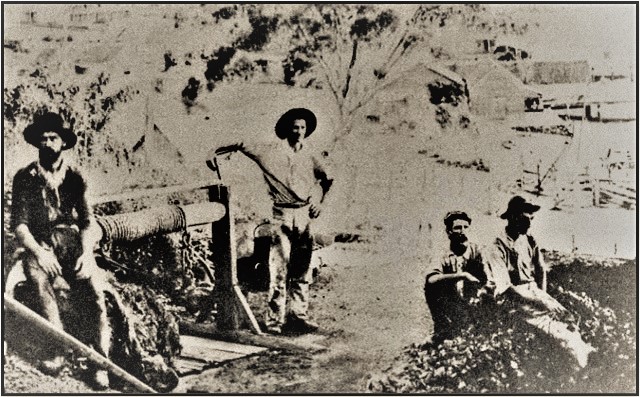 05 May Here in History by Betty Laver

Manganese mines had operated on Auckland Hill from the

successful means of extracting gold from the complex ore leaving

techniques behind. The Mt Morgan mine needed such a boost,

so a syndicate of men from Toowoomba eventually started work

side. The ore was regularly dispatched to Rockhampton by the

treatment. This project provided employment in Gladstone. The

the remainder of the ore produced was used in Queensland. In

1899 the Sea Gull carted manganese to Rockhampton for Mt

Morgan. The old shafts, which were sunk into solid rock, were

only partly covered by a rusting steel grate. In later years, they

become dangerous to the unwary climber who negotiated the

Captain Cook Park. With the shafts being right beside the stairs,

many incidents were reported of people almost falling into them,

Photo from Jimmy Harris -Manganese being mined on Auckland