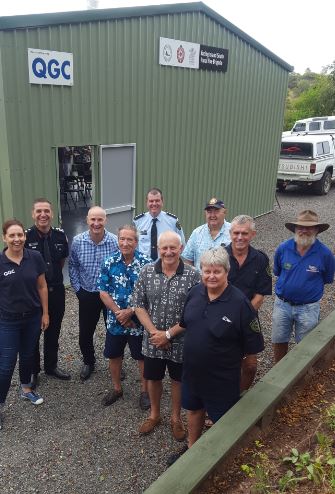 Facing Island South has a new Rural Fire Station at Gatcombe that will provide extra services to the island.

Member for Gladstone Glenn Butcher officially opened the station on behalf of the Minister for Fire and Emergency Services Craig Crawford during a special ceremony at Gatcombe on February 3, 2018.

Mr. Butcher said the new smaller Rural Fire Brigade areas will be better able to service both communities on the island.

“This new station and the work that the Rural Fire Brigade undertake on the island is critical to reducing the fuel load, particularly because there are so many campsites on the island.

“Hazard reduction burns are vital to our bushfire season preparations,” he said.

The Facing Island Rural Fire Station was completed last year at a cost of $74,793 with the majority of funding coming from QGC’s Sustainable Communities Fund and the remaining contribution from the Queensland Fire and Rescues Service.

Within the Gladstone area, there are 75 Rural Fire Brigades and 38 appliances, and 1812 volunteers.

Mr. Butcher took the opportunity to thank the South Rural Fire Brigade volunteers of Facing Island for their hard work and dedication.

“This new facility wouldn’t have been possible without the determination and perseverance of the brigade volunteers, they are to be commended for their efforts.”