Info you need to know before Eels v Broncos TONIGHT 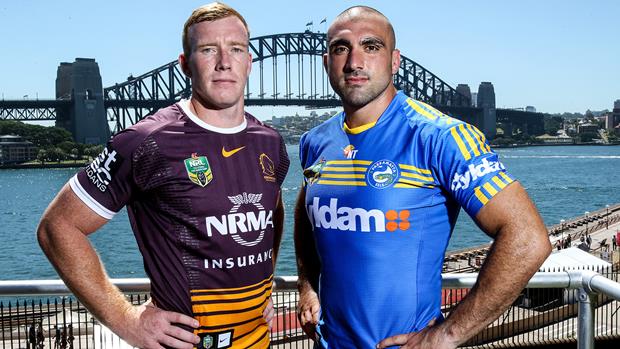 Tonight is the night we have been waiting for, NRL is back baby! Feels like it’s been AGES since we got that football feeling. With the return of NRL there comes a few changes – the main one is:

GLADSTONE NEWS AND HOG’S BREATH CAFE has organised FREE NRL tipping for the Gladstone Community. It a mix of pure awesomeness Watch Footy, Win Steak!  Sign up for tipping to go in the draw to win in the $1300 Prize Pool. Top Tipper each week gets a $30 Hog’s Breath Voucher to eat steak and curly fries and yummmmmy stuff. (sorry, i was daydreaming about Hog’s Breath Steak when writing this and  drooled on the M key on my keyboard) Back to it. Sign up Here: http://103.9.171.67/~gladstonenewscom/nrl-tipping/

The 2016 Telstra Premiership kicks off tonight – when Parramatta Eels host Brisbane Broncos.  John Grant from Australian Rugby League Commission Chairman said Members and supporters would see more Rugby League than ever before in 2016.

“Under our new broadcast agreement, there will be football from Thursday through to Monday for much of the season, with every game televised live,” Mr Grant said.

“Rugby League will reach more homes and more fans than ever before.

“And we hope that as more families see the best our game has to offer that they will want to be there when history happens.”

Here’s some helpful info for tipping!

As the Eels and Broncos share the honour of launching the 2016 Telstra Premiership season on tonight their respective fan bases wrestle with the strongest emotions associated with Round 1.

For the home side an aggressive recruitment drive that yielded Kieran Foran, Michael Jennings, Beau Scott and Michael Gordon – and an early piece of silverware that came back with them in excess baggage from the Downer NRL Auckland Nines – has given one of the heartiest home crowds great cause for optimism.

For those cheering on last year’s runners-up, a settled roster that has seen the addition of James Roberts to replace the retired Justin Hodges in the centres means the Broncos will carry the tag as premiership favourites into the season opener.

Hope and expectation: Two vastly different emotional states that can be simultaneously heightened by a strong showing in the first game of a new season.

The big-name signings are all there for the Eels along with former Manly flyer Clint Gutherson on the wing and Nathan Peats returning at hooker after suffering a spinal fracture in Round 23 against the Roosters last season.

Other than Roberts the only new faces in the Broncos team that lost the grand final are Englishman Greg Eden on the wing and Josh McGuire returning from his Achilles tendon injury in place of Mitchell Dodds who is now in the Super League.

Watch out Eels: Broncos half Ben Hunt has been the subject of two recent disciplinary breaches that saw him miss Brisbane’s World Club Series demolition of Wigan and then issued a 12-month ban from Queensland Origin selection. Expect the response to be quick and decisive. Now one of the premier halves in the premiership, Hunt was sidelined when Kodi Nikorima applied pressure on his position with a star turn in England and knows the only way to keep the wolves at bay is to overcome his grand final nightmare with a dream start to 2016. One of only six players to hit double figures for tries and try assists last season, Hunt has a new go-to man on the right edge in James Roberts which will open up more opportunities for his own ‘show and go’.

Watch out Broncos: Chirpy Corey Norman would love nothing more than to upstage his former teammates and the club where he played 63 games over four seasons with a big performance on opening night. The player of the tournament at the Auckland Nines, Norman seems to be revelling in the stability brought by the arrival of Foran and the freedom to once again trust his instincts. In 22 games last season Norman had just 10 try assists to go with 12 line-break assists for the Eels but the man who was tasked with the assignment of taking over from Darren Lockyer in 2012 looks set for the biggest year of his career. A win against his former club would be the perfect start.

Key match-up: Michael Jennings v James Roberts. The most exciting match-up of new recruits that we will see all season, the electrifying pace possessed by both Jennings and Roberts on both sides of the field is sure to offer up some magic moments in Round 1. Both have come into their respective squads late in the pre-season but with first impressions so important in a new fan base, whoever can get the better of their opponent will quickly become a new crowd favourite. Playing for the Titans last season Roberts bettered Jennings for tries (16 to eight), tackle breaks (97-81) and line breaks (13-9) but Jennings had seven try assists to Roberts’ three and is an incumbent NSW and Kangaroos representative. Intriguing.

The history: Played 49; Eels 19, Broncos 29, Drawn 1. Parramatta have enjoyed the better of recent history with three wins from their past five meetings, two of which came at Suncorp Stadium. The two teams have met in Round 1 twice since Brisbane’s entry into the competition in 1988 with the Eels yet to enjoy victory. In Round 1, 1994 Keith Blackett’s goal-kicking saw the Eels escape with a 16-all draw in Brisbane and in 2012 the Broncos won 18-6 at Pirtek Stadium with Corey Norman at five-eighth. Norman and Tim Mannah are the only current Eels who played in that game four years ago.

What are the odds? Eels $2.30, Broncos $1.65. The Eels have been the best backed side to win the title during the off-season but when it comes to Round 1 there’s been more money on the Broncos to get off to a winning start according to Sportsbet. Punters are thinking Brisbane 13-plus with 75 per cent of margin betting money on that option. Corey Oates is best backed for first try-scorer ahead of Semi Radradra.

The way we see it: With February form lines as useful as a stopwatch at a snail race, confidently predicting an outcome in this one is fraught with danger. Will the excitement of a pre-season of promise inspire the Eels to a rousing victory or will the cool heads of a Broncos team with their eyes on the major prize prevail? Two classy halves pairings going head-to-head, battle-hardened forwards and backlines with pace to burn; it’s a cracking way to kick off 2016 and it’s unlikely to be decided until the dying stages. Broncos by four points.