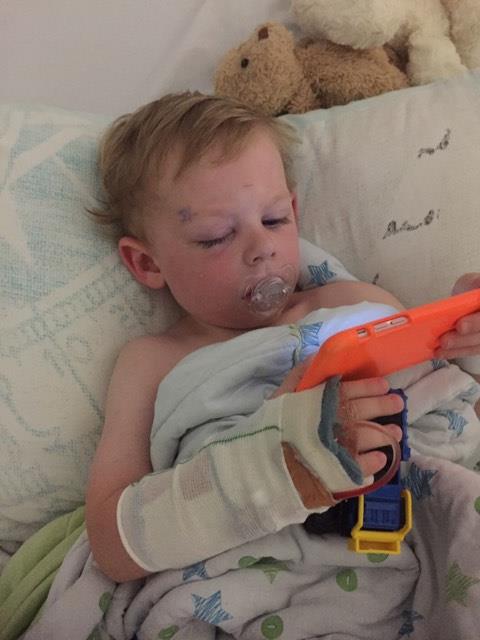 2017 didn’t start how the Stokes family thought it would. They were told by 2 doctors here in Gladstone, one GP and one ED Doctor that Jack had a lazy eye. If it weren’t for Lara’s ‘mummy instinct’ Jack could have lost his life.

Jack is a normal two and half year old with loads of energy always happily playing and running amuck. But 2 months ago Lara had noticed that his right eye had started to deviate outwards but at first dismissed it as a lazy eye. A week later she noticed that his eye had a ‘glow’ and as mummy’s do, Lara researched, ‘glow in my toddlers eye’ and Retinoblastoma came up. Not wanting to jump to conclusions with Doctor Google Lara took a pic with the flash on and sent the pic to her friend in Perth who is a scientist. Her friend advised her to take Jack to the emergency department straight away as it looked like a Retinoblastoma and the family did on January 1st New Year’s Day. The Stoke’s family waited 5 hours to basically be told they were wasting their time, that it wasn’t urgent and to take him to an optometrist as it seemed like a lazy eye and very unlikely to be Retinoblastoma. The family then took Jack to the optometrist as instructed and they referred them to an ophthalmo

logist in Brisbane locking in an appointment the following Monday.  The ophthalmologist sent Jack and his parents urgently to Lady Cilento Children’s hospital who arranged for emergent exploratory surgery for Jack the following day. They then confirmed it was Retinoblastoma and that Friday Jack had to have his eye removed.

After many hours waiting for Jack the doctor told Lara and Brock the surgery to remove his eye was a success, the tumour seemed to not have spread into the optic nerve (which is a direct pathway to the brain) and had in fact saved his life.

The doctor performing Jacks surgery, Professor Glen Gole, said “it had to be done or it would’ve killed him.”

Jack still needs to undergo surgery next Tuesday 24th, to have a lumbar puncture and bone marrow biopsy to confirm whether the cancer has spread to other parts of his body. While Jack now has a donor eye implanted, he will forever be blind in his right eye and require prosthesis.

“There needs to be more awareness in small towns.  If I’d taken Jack to an emergency department in the city they would have rushed him straight in to surgery. Whereas here I had to push to get anything done about it.”  Jack’s mum Lara said

As you can imagine there are many medical costs for the Stoke’s family.  A Go Fund me page is set up for little Jack, if you would like to make a donation.  The Stokes family are overwhelmed by the love and the support they have been shown by family, friends and the community and would like to say a big THANK YOU to all.

To donate please go to gofundme.com/jack-stokes