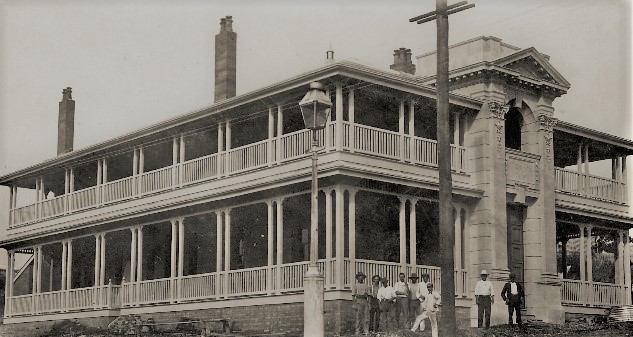 Originally the Commercial Banking Company of Sydney Ltd building, these premises were built in 1910-11. In September 1958 the bank accepted an offer for the premises from Gladstone businessman Michael Busteed and from the early 1960’s it was occupied as a boarding house. This was when it became known as Kullaroo House.

In the 1970’s it went to new owners, Goodwin, McKenzie, Forbes and Partners, who were lawyers, for future expansion of their business. Tony Goodwin had a great appreciation of architecture and the value of the skills of tradesmen from bygone years. As Kullaroo House it had been clad in fibro and louvers to close in the beautiful verandah and was painted pink!

When it was stripped back Goodwin found cedar doors, windows, architraves and skirting boards and a solid red cedar staircase and ornate front counter. Best of all, he found each room had a magnificent period fireplace with a cast-iron heath, imported English tiles and a solid marble mantelpiece By the time he had the building restored it to its former glory, the firm had the most magnificent legal offices in Central Queensland. They sold the premises in 1981 and Kullaroo House was then used as a restaurant.

In 1993 the Gladstone Port Authority bought the building and it was refurnished to accommodate staff. In 1996-97, Albert Spencer from Wietalaba Holdings was commissioned to reinstate the building, adding a large extension to imitate the architectural detail of the early 20th century bank. The original Commercial Banking Company of Sydney Ltd building (1911-1958) was heritage registered in December 2006, although it has not lost the name of Kullaroo House. This became an outstanding building in Gladstone.