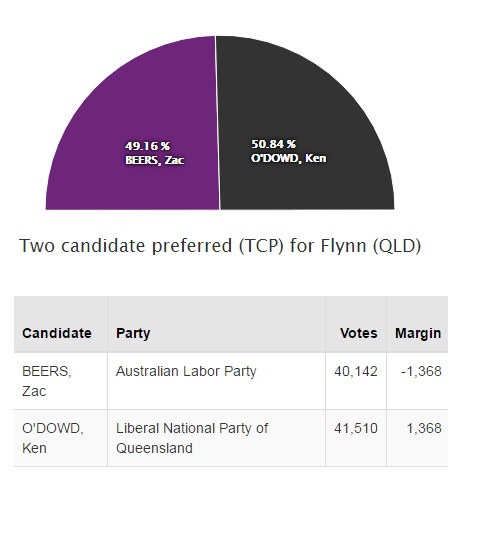 With a 1368 vote margin between Liberal candidate Ken O’Dowd and Labor candidate Zac Beers, it looks as though Ken O’Dowd has taken the seat of Flynn after a long election campaign.

Ken O’Dowd is currently in Canberra for party discussions today, but offered a statement on his victory – “After the longest election campaign in Australia’s history and a lengthy, knife-edge ballot count in Flynn, the wait is finally over. Mr Beers contacted me this afternoon to concede the seat and wished me luck for this term of office.”

“Mr Beers contacted me this afternoon to concede the seat and wished me luck for this term of office.”

“A third term in federal parliament is no mean feat and I must take this opportunity to thank the great support team I have. Without the support of friends and family and the tireless efforts of both my staff and campaign volunteers, this would not have been possible. I look forward to getting to work delivering for all the people of Flynn once again as part of a strong, stable Coalition Government.”

Zac Beers kept a close race with his campaign focused around changes to Medicare under a coalition government, in addition to maintaining local employment. He also received quite a bit of support; hosting visits throughout his campaign from opposition leader Bill Shorten, Wayne Swan and Catherine King amongst others.

Despite today’s result not being the one he had hoped for,  Zac said “Today I called Ken O’Dowd and congratulated him on his victory in this hard fought election campaign.”

“It has been an enormous privilege to run as the Labor Candidate for Flynn. As I travelled thousands of kilometres throughout the electorate, I met some great people who just wanted a fair go from Canberra. I would like to thank all of my supporters who helped campaign this election. Your help was critical to ensuring we got one of the highest swings in the state.”