Local athletes race to success with start of new season 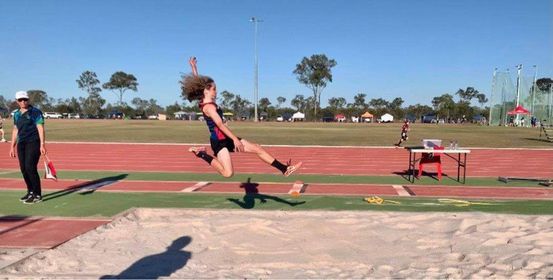 Gladstone Athletics Club have had a cracker start to their 21/22 season with a club record broken and a strong showing at the Little Athletics Queensland Spring Carnival in Bundaberg.

Dylan Gardiner broke the club’s U14 high jump record on his first day of competition, jumping an impressive 164cm and breaking the previous club record of 163cm held by Jacob Sutcliffe from 2003/2004 and Dwain Weyers from 1999/2000.

While 36 Gladstone Region athletes headed to the Spring Carnival on September 25, securing a number of Personal Bests and an impressive 21 medals.

Club President Shane Gibson said it was a great start to the 21/22 athletics season.

“Our athletes have come out racing and based on these early PBs and results we are very excited about what the rest of the season holds,” he said.

“We’re pumped to see our athletes be their best and have fun at the Caboolture Twilight Carnival on October 16 and the Coles Summer Carnival in Brisbane on October 23.”

The Gladstone Athletics Club includes athletes under Little Athletics Queensland, U5 to U17, and older athletes, aged 12 to veterans, under Queensland Athletics.

Little Athletics is a fun, social and active program for boys and girls, and teaches a wide range of skills in events from running, jumping and throwing.

Coaching is offered on Tuesdays, and club competition is held on Saturday mornings from September to March at the Laurie Delany Oval at CQUniversity on Derby Street.

For more information on registering with the club visit www.gladstoneathletics.com.au.