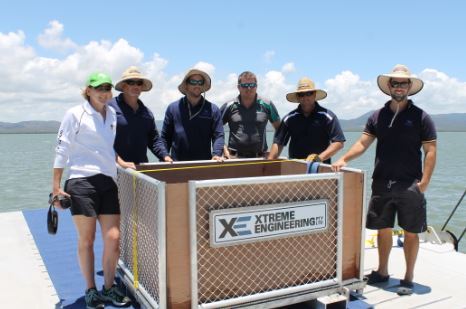 Posted at 15:51h in Community, Environment, News by News 0 Comments

It was a real team effort to release Flinny the massive female green sea turtle into the Gladstone Harbour last week, with several local businesses chipping in to lend a hand.

“Flinny weighed 182kg when she came into care and was considered underweight, which is hard to believe,” Mr Tumbers said.

“On release she weighed 217kg, so Xtreme Engineering helped us custom make a harness to secure her for transport and brought down a Franna crane to lift her from her tank.”

It’s recommended that rehabilitated turtles be released as close as possible to their capture site, so Curtis Ferry Services took the special passenger back out into the harbour near the Wiggins Island Coal Export Terminal for release.

Mr Tumbers said Flinny had been recovering at the organisation’s Turtle Rehabilitation Facility for nearly six months after she was brought in with ‘floating syndrome’.

“Floating syndrome can be caused by any number of things including parasitic loading, obstructions, infection and organ related issues,” Mr Tumbers said.

“In this case, Flinny was floating and also had a hole in her shell, potentially from a burrowing barnacle.

“Flinny underwent numerous blood tests and antibiotic treatments during her rehabilitation, and eventually a specialist had to remove a portion of her affected shell.

“After the infection cleared, we repaired the shell using the same product used in human surgeries such as hip replacements and spinal surgeries.”

In conjunction with the Gladstone Ports Corporation (GPC), GAWB operates a Turtle Rehabilitation Facility at its Fish Hatchery on Lord Street.

GPC Marine Scientist Dr Megan Ellis said that this was a happy ending for the turtle.

“The turtle is one of Gladstone’s iconic Big 6 and the successful rehabilitation and release of Flinny is a fantastic outcome,” Dr Ellis said.

“Her release is also a timely reminder for people out on the water to keep watch for turtles, especially those suffering from floating syndrome, who are at high risk of boat strikes.

“The simple message is ‘go slow for those below’.”

An online promotion was held prior to the turtle’s release to find the perfect name.

Flinny was the winning entry, after Matthew Flinders who chartered and named Port Curtis in 1802.