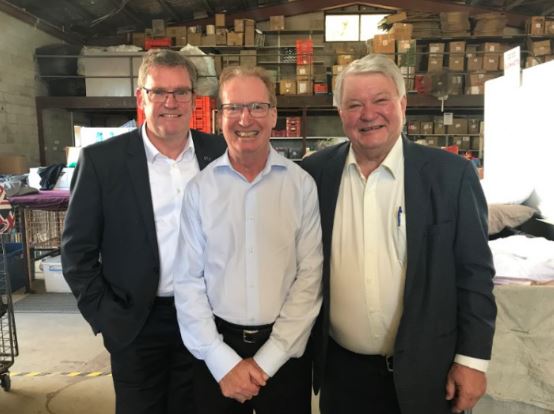 The Vinnies Warehouse and Family Support Centre in Gladstone will undergo a major facelift and expansion allowing it to increase the services and support it offers Gladstone residents.

Member for Flynn Ken O’Dowd said the $984,000 upgrade project was a significant investment that would help strengthen the community.

“This important project will provide a much better work environment for the volunteers who contribute so much time and effort to help our community,” Mr O’Dowd said.

“Improvements at the site will include extra storage space and improved work areas including an air-conditioned sorting room, construction of a secure truck unloading bay and a new sealed car park.

“To ensure anyone in need can continue to receive much-needed support and counselling services, a new administration/counselling facility will also be built.

We expect the project will deliver 30 jobs during construction and one ongoing position.”

Minister for Regional Development, Territories and Local Government John McVeigh said the project will deliver significant economic and social benefits to the community.

“Under round two of the Building Better Regions Fund – Infrastructure Projects stream, the Coalition Government is investing well over $200 million in 136 projects with a total project value of $459 million,” Dr McVeigh said.

“This means, in each successful community much anticipated local projects are receiving the funds needed to take a big idea and make it a reality.

“A further $200 million was announced in the 2018 Budget for a third round of the Building Better Regions Fund – a clear indication of the Coalition Government’s commitment to create jobs, drive economic growth and build stronger regional communities into the future.”

The second round of the Building Better Regions Fund, which includes the Community Investment stream and the Infrastructure Projects stream, is expected to create up to 10,000 jobs from over 240 projects.