Meet (some of) the Candidates 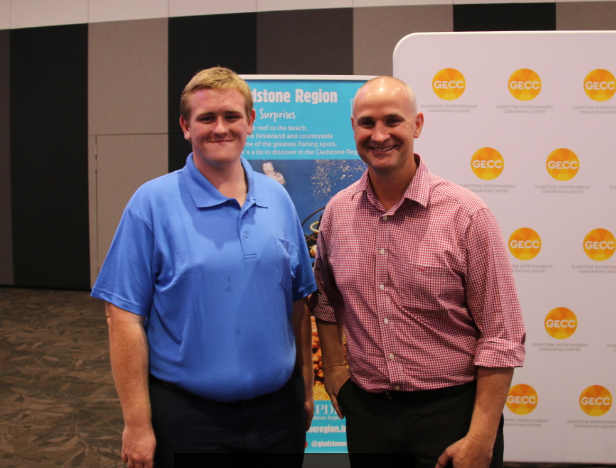 23 Nov Meet (some of) the Candidates

Some of his views divided attendees but at least the LNP candidate for Gladstone, Chay Conaglen showed up, unlike his Greens and One Nation counterparts.

In a nod to his inexperienced rival, ALP candidate Glenn Butcher said he was very disappointed that the One Nation candidate Amy Lohse and the Greens “couldn’t be bothered” showing up to meet the local community at a Meet the Candidates event organised by GAPDL last week: “I have to congratulate Chay, he’s only young, as he said, and turning up to this must have been quite daunting.”

While not in a debate format as such, Mr Butcher had the advantage of speaking second and was well up to rebutting some of Mr Conaglen’s criticisms of Labor policies, including moderating a number claims made by the LNP candidate about high unemployment in the region and rumoured redundancies at BSL due to high power tariffs.

Mr Butcher said later in an interview that if he’d had a magic wand to make one change in the Gladstone electorate right now, he said it would be to go back in time and ensure the three LNG plants on Curtis Island were built one after another instead of all at the same time for a more sustained employment boost for the region.

In addition to outlining his government’s record, Mr Butcher listed the capital works and job creation programs instigated by the Palaczszuk’ Labor government during their term of office, with pledges of more to come if elected, noting that Gladstone had spent a long time in the shade due to the independence of our previous MP.

“We had twenty years with an independent member here, and much as Liz Cunningham was an absolutely fabulous state member, governments of all denominations didn’t support an independent candidate in this community,” he said.

While pledging to help small business and cut red tape, the LNP candidate spoke frequently on the high cost of power to doing business and the need for cheaper coal-fired power stations to be opened, re-opened or built to maintain baseload power in favour of renewables, repeatedly calling the ALPs 50 percent renewables target “ridiculous”.

Mr Butcher countered with an analogy to mobile phones, painting coal-fired power stations as the ‘clunky old landline pinned to the wall’ and renewables sleek contemporary technology, getting more affordable and more efficient by the year; he foreshadowed plans for Australia’s largest solar farm proposed for the State Development Area at Aldoga and spoke with pride of projects taking place in our very region where “old tyres and waste oil are being converted to biofuels for the US Navy Fleet”.

“It baffles me why anyone is backing this coal-fired power station,” he said.

“No-one wants to fund it, no-one wants to build it, and in seven years’ time we’ll have this massive white elephant. With renewables, once it’s built, it’s free to generate.”

It was in response to a question to both candidates on their stance on abortion and euthanasia from the Cherish Life organisation, when Mr Conaglen who hasn’t hidden his antipathy for same-sex marriage, got fired up.

After Mr Butcher stated a Labor government would bring a bill to parliament next year to modernise laws concerning abortion, and outlined his personal reasons for supporting euthanasia, Mr Conaglen gave attendees a spray more akin to an “ordination” than a politician’s stump speech:

“If you have life, then it’s murder, that’s exactly what it is, and our laws allow it,” he said.

Mr Conaglen, who said he’d made a submission to the current Law Reform Commission review of abortion laws as part of his studies and that the LNP has no plans to change the statutes. He says the review does not take a position on “the morality of it”.

“Our current law has exemptions for medical professionals so at the moment it is technically criminal,” he said.

“Can you imagine if we had someone walking around now hurting people and killing people. Come on. COME ON. What did Hitler do?” he urged.

Mr Conaglen’s views have been widely propagated on social and in regional print media, where they have clearly polarised readers.