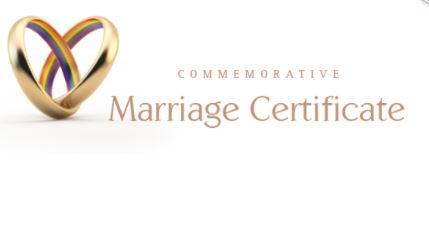 Two newly-designed commemorative marriage certificates are available to Queenslanders celebrating their nuptials in 2018.

Attorney-General and Minister for Justice Yvette D’Ath said the Registry of Births, Deaths and Marriages commissioned the new designs in part to acknowledge the new same-sex marriage laws passed earlier this month.

One of the new designs features a flowing red ribbon in the shape of a heart, while the other incorporates two entwined gold rings with rainbows inside.

The three previous designs – with the words eternity, devotion and commitment – are still available.

“Australians voted strongly in favour of marriage equality and it was only appropriate that our registry acts fast to ensure an appropriate certificate was available,” Mrs D’Ath said.

“We have at least two same-sex couples marrying at the Brisbane registry in early January and I’m sure many other ceremonies will be taking place around the State.

“Those couples can choose from either of the new certificates or indeed, any of the other ones.

“The new certificates are gender neutral and a true reflection that marriage is marriage, irrespective of gender.”

Mrs D’Ath said the Registry had a busy year after opening its new wedding rooms in a city high rise building on Ann Street last January.

“The feedback from couples and guests about the new ceremony rooms with their stunning views of the mountains and out over Moreton Bay has been overwhelmingly positive,” she said.