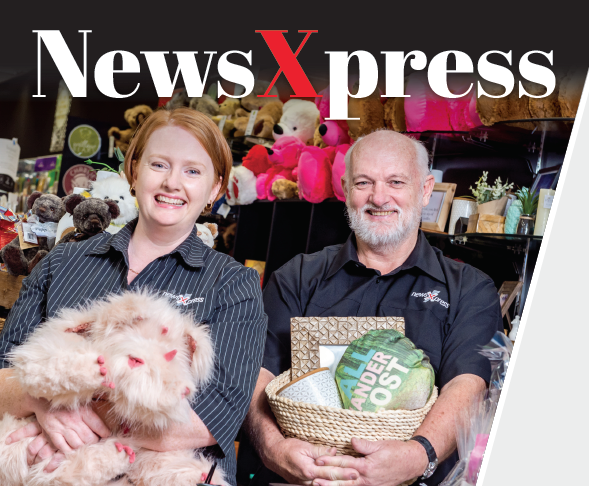 IN 1977 IAN CHAPMAN ALONG WITH HIS PARENTS ALAN & AVIS, BROTHERS COLIN & KEN AND THEIR WIVES GLORIA & SHARON MOVED TO TOWN, HAVING PURCHASED GLADSTONE NEWSAGENCY.

Their plan was to run the store and establish Kin Kora News at the new shopping centre; thinking that perhaps they’d be here for just a few years. But, as many Gladstone stories go, Ian met his wife, Chanel College teacher Michele, in 1978, and the planned short stay

in Gladstone was extended. After 40 years Ian is the only family member actively involved in the business and he’s still loving it!

“When we first opened in the shopping centre we were located where Best & Less is now,” explains Ian Chapman. “In 1982 we moved to the current Williams site when the centre did the first of its three expansions and then, in 1986, we moved into a caravan for three months, before ending up in our current location. The shop recently changed shape and design, but we are happy with the result ”.

Over the last 40 years, the Chapman family has employed over 200 locals in a variety of roles including delivering papers and serving our customers in the shop. Some of our team have been with us for a long time: Debbie Reynolds started 6 months after we opened in 1977 and Barb Hall has just clocked up 31 years. Continuing the family involvement in the business is Ian’s daughter Sarah who is the NewsXpress Kin Kora product buyer; Sarah started her newsagency career when she was paid in chocolate frogs for assisting with the set-up of the Back-to-School supplies counter before she had even started school herself. Now Ian’s four-year-old grandson Tom also spends time behind the counter on a regular basis!

The shop Ian is running today is a far cry from the 1970s newsagency whose core business were stationery, cards, magazines and newspapers. He now operates a business that stocks homewares, collectable bears, soaps, pop culture products, puzzles and even socks, alongside all the traditional products the Chapman family had when they started 40 years ago.