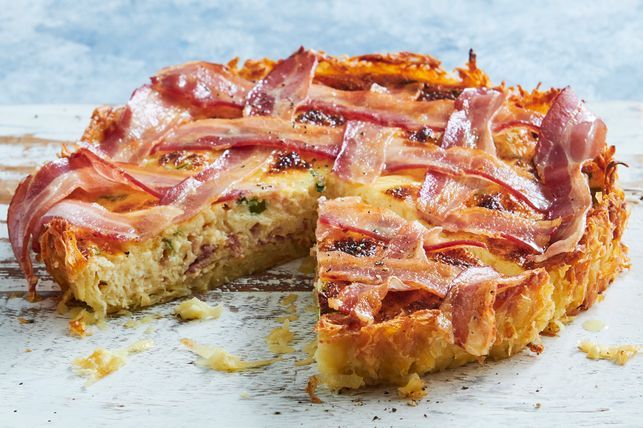 Once you’ve nailed this gluten-free potato crust, the sky is the limit.

Use any quiche fillings you like and top it with our nifty bacon lattice for the ultimate flavour bomb!

For the hash brown crust, preheat oven to 200°C/180°C fan forced. Peel and coarsely grate the potatoes. Use your hands to squeeze out excess liquid. Place potato in a bowl. Add the butter and egg yolk. Season well with salt and stir until well combined. Press the potato mixture into the base and up the side of a 5.5cm deep, 21cm (base measurement) round fluted tart tin with a removable base. Bake for 25 minutes or until lightly golden. Brush with egg white. Set aside to cool slightly.

Meanwhile, cut three 3cm-wide strips of bacon lengthways from each rasher. Set aside. Coarsely chop the remaining bacon. Place the chopped bacon in a non-stick frying pan. Cook over medium/ high heat, stirring often, for 5-7 minutes or until golden. Set aside.

Reduce oven to 170°C/150°C fan forced. Whisk the eggs in a bowl. Whisk in the cream, milk and parmesan. Season. Stir in the cooked chopped bacon and shallot. Pour into prepared crust. Bake for 20 minutes or until starting to set. Remove quiche from oven. Arrange bacon strips in a lattice pattern over the quiche. Bake for a further 15 minutes or until the filling is set and bacon golden. Set aside for 15 minutes before slicing.