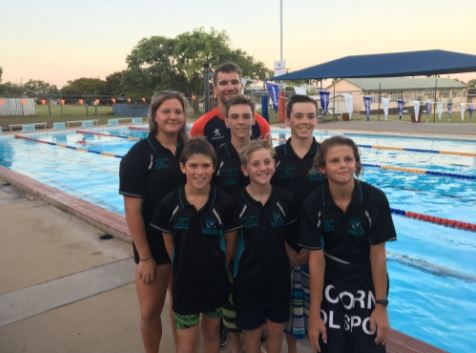 In a stand-out performance in what is arguably the most competitive state for swimming in the country, Sally followed up with a silver in the 50 m Freestyle, with a time of 29.16 seconds.

With eleven swimmers from Boyne, six each from Western Waves Swimming and Triathlon Club and Gladstone Souths Swimming Club, and eight from the Gladstone Gladiators, our region was well represented in the prestigious state champs which resulted in a swathe of personal bests and swimmers qualifying for the finals.

Wests Clara Furness swam four personal best times and qualified for the final for the first time, finishing tenth in the backstroke. From twenty swims, Westies posted 12 PBs, including one from Clara’s dad, Richard Furness in freestyle.

Four of the six swimmers from Souths Swimming Club made the top 20 in the state, placing as high as 7th, 9th and 13th

Souths Caleb O’Mealley, 13, made 2 finals in freestyle and backstroke finishing 7th and 9th. He also got a National Age qualifying time for freestyle of 26.77 seconds.