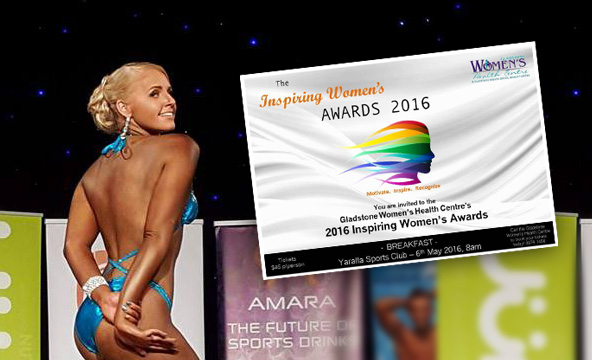 Posted at 10:30h in Community, Fitness, Lifestyle, What's on by Jac 0 Comments

Gladstone News are extremely proud to be sharing Taylor’s story in this edition and thank her for agreeing to be very open, honest and share her body changing journey.

I first started this crazy fitness journey in February 2015. Prior to this I knew I was slowly but surely gaining weight and as most do i said to myself ‘Ill start a diet on Monday’ or ‘I’ll just go to the gym and run it off on the treadmill’. My partner was working FIFO and I was eating comfort food. While he was away I would indulge, when he returned we would eat out and indulge. Soon enough this became somewhat normal and I had convinced myself these bad food habits were a good thing for me emotionally.

Once the FIFO was over and I settled back into a normal routine, my meals were getting healthier and I would try to exercise regularly. This only lasted a little while until I would continually fall on and off the band wagon. It wasn’t until early January 2015 that i realised my weight was starting to gain again. I was upset with the way I looked in photos and my clothes started to feel snug. At this same time my partner, 2 friends and I were planning our trip to Europe and I knew i had to do something to get myself into shape before we left.

I went in search of Personal Trainer as I felt this was my only hope in getting myself motivated. I had messaged a lady i knew, who was a Personal Trainer, to see if she could help or recommend anyone who could cater around my work hours. She then suggested I message Win Marsh from WMTRAINING.

I sent Win a message and instantly got a reply, organised a consultation and there I was s
tanding in her gym the next week. I had told Win I wanted to loose weight and tone up for my big holiday.

After a short time I started to physically see the results in my body rather than just on the scales. I had never been strong or had any definition and I was also amazed at what eating 6 healthy meals a day and weight training was doing. Europe came up fairly quickly and i knew I was then going to be off training and dieting for 4 weeks.

While all my training was happening Win and her husband Brett were also in training themselves but for a Bodybuilding comp. One night at my session after i returned from holidays they asked me had I ever considered stepping on stage, because with my body shape and frame I’d be perfect for it and they thought I should seriously consider it. Well i had never laughed so hard in my life, i said “You, want ME, all of this, to do that! You guys are hilarious”.(Although very deep deep way down where nobody could find it was buried and locked away in box the thought that yes one day i would love to do something like this but saying it out loud would make me sound like a crazy person).

They then asked the life changing question that almost left me speechless “Well what’s stopping you?” and at that moment a million things ran though my head but in reality the answer was nothing, nothing was stopping me from doing this. So off i went with information and to talk to my partner, family & friends about it. They were all so supportive and after a week of contemplating it i finally said YES, i am going to do this.

We started pre comp training in July 2015, this consisted of semi-strict meal prepping and muscle building weight training. I was only allowed alcohol and non meal plan meals on special occasions, small naughty snack if I couldn’t go on without one. This was all to prepare me for the 1st of January 2016 when the hardest part was coming. Everything was absolutely strict to a tee; every bit of food measured and clean, absolutely no alcohol or naughty snacks, could not miss a meal, only one portioned refed meal a week. Training wise I did HIIT Cardio in the mornings, then high reps with short rest weight in the afternoons.

I definitely had my weak moments where I questioned myself and had almost given up when it was getting too hard. It was difficult to miss out on special occasions like birthday dinners/cakes, eating chocolate eggs on Easter Day but at the end of the day i set myself a goal and that was to walk out on that stage and pose my heart out. I have always been the bigger girl and i wanted to prove that there is nothing wrong with embracing your figure in a strong and healthy way.

This was without a doubt the most challenging, yet rewarding thing i have ever done in my life. I reached my goal competing in the Figure Noice Tall Category at the ANB Coral coast classic, Townsville.

I want the people of Gladstone who find themselves in the same situation as i was to set themselves a goal they are passionate about, whether it be big or small, and follow it. Believe in yourself and trust the process.

Gladstone News is a proud to partner with Gladstone Women’s Health Centre as a sponsor of the 2016 Inspiring Women’s Award.

This Friday morning at Gladstone Events Centre – Yaralla Sports Club we find out the winners and will include them in next edition.