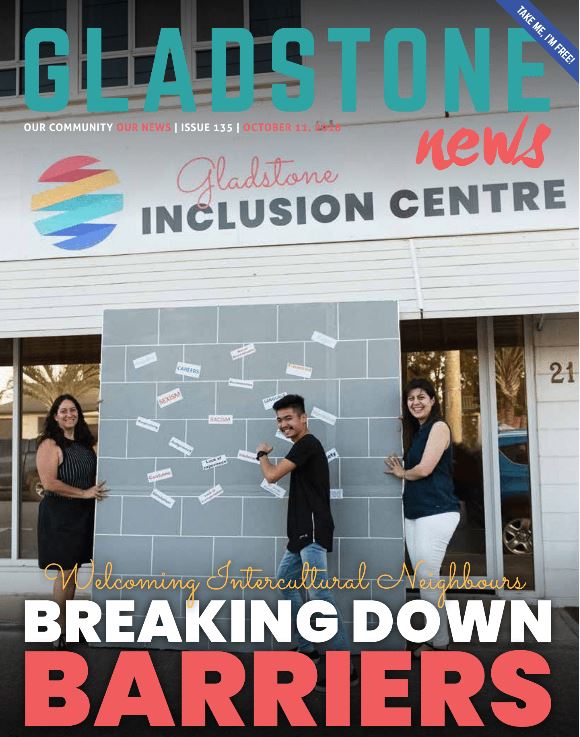 Welcoming Intercultural Neighbours’ new Gladstone Inclusion Centre will help build a community that embraces diversity, by breaking down the barriers residents face when settling into the Gladstone Region.

Welcoming Intercultural Neighbours Inc. organises programs and events that promote cultural inclusivity within the Gladstone region and has been operating for the past eight years. As a driving force in the development of Gladstone’s cohesive community, the WIN team are excited to officially open their new home located at 21 Off Street in Gladstone.

The organisation offers a range of services to the Gladstone community. Some of these services include; information sessions, consultancy, referrals, advice and support, networking, community awareness, events planning and promotion, advocacy, training and employment programs, children and family services and youth services. In addition to this, the group also advocates for improvements to policies and procedures relating to social integration, cross-cultural communication and community cohesion, across all tiers of government. WIN has 2000 community members registered on their database, 75 active volunteers and 9 staff. The service is essential in supporting those who are new to town and providing them with the support they need to become part of the community.

The Gladstone Inclusion Centre was officially opened last Thursday. The new facility will enhance WIN’s existing services and programs by providing a safe, friendly and inclusive space for residents to socialise and learn.  The venue will be available to all individuals and groups who seek to create educational spaces as well as social events and activities.

At the opening, Councillor Rick Hansen spoke of the multicultural diversity of the region and the importance of the services that WIN can provide at their new centre. “The Gladstone Region has a very multicultural mix, with people from varying cultural backgrounds, languages and identities. They are all living and working in this place to improve their lives, and the lives of those around them,” he said. Cr Hansen praised the WIN team and said they should be congratulated for the work they do in helping people feel welcome and become part of the social fabric of our community.

Upon entering the building, visitors are greeted by a dedicated reception area. Natalia Muszkat Executive Officer for WIN said “There are five office spaces all carpeted, air-conditioned and with an internet connection. The additional meeting room is also air-conditioned and has a capacity of 25 people”. There is also a large, air-conditioned multipurpose room with several power points; this room has a capacity of 100 people. The offices and meeting rooms are all conveniently serviced by a central kitchen space with a refrigerator, sink, cupboard space, kettle and microwave. Visitors will find a 13-space car park at the rear of the facility with four undercover parks.

Long-term and casual hire arrangements for community organisations, local groups and businesses are available. Those interested in hiring rooms or office space at the Gladstone Inclusion Centre should email contact@win-australia.org.au

Chris Doring, a graduate Mechanical Engineer has benefited from the work of WIN first hand. Chris and his family arrived from the Philippines on the 1st of September 2009. Chris completed his education at Gladstone State High School and then went on to complete a Bachelor of Engineering at Central Queensland University.

Chris explained that before he found WIN he had completed his university studies and was having a hard time finding a job in his chosen field. “I looked over my resume and thought it looked complete, but something mustn’t be right, especially when I considered how many jobs I had already applied for,” he said. It was then he decided to look into volunteering so he could add some community-based activities to his resume. That was two years ago and he has been a volunteer at WIN ever since. “I’ve been doing activities one after another. It’s like having a laptop, taking a cable and plugging it into the internet. You uncover this huge network of Not for Profits, academic and industry partners, social events, networking events, and a pool of resources at your fingertips,” Chris said.

“One of the events that WIN got involved in, which I’ve also participated in, is the study conducted by CQU called Social Innovation Conference,” Chris added. “One topic that got brought up was the difficulty of the youth in the region to get into their first jobs to gain experience. Being one of the “youth of Gladstone” in the panel, I explained the difficulties that I had experienced in my job applications. Everyone else sort of agreed to what I had said and started taking down notes. After the session was finished, one of the industry representatives approached me and asked me if he could get a copy of my resume. I was like OMG!”

Chris said he provided the representative with his resume and to his surprise, one week later, a manager from Walz Construction phoned him and asked if he was still unemployed. “They asked if I would like to work for them and voilà, I wasn’t unemployed anymore! I just couldn’t 100% confirm whether that was a WIN magic or not!”

Chris said he is now working for the Gladstone Ports Corporation as a Graduate Engineer and still enjoyed volunteering for WIN.

How has WIN helped you?

Gladstone News spoke with three community members about how WIN has helped them settle into our community.

“I was a participant of the Skilling Queenslanders for Work program last year. I have done the Barista training and a Certificate 3 in Retail and Responsible Service of Alcohol. “

“Before I became a staff member at WIN I was a volunteer for more than a year. WIN helped me to improve my English-speaking skills by meeting new people and attending WIN events. It also boosted my self-confidence at the same time. Mostly it has helped me to get a job. My first ever job! I am really grateful WIN is here to help and support.”

Jo is a volunteer and also assists in teaching English.

WIN has helped Jo by helping her to meet new people thanks to networking opportunities. She enjoys helping others to feel more comfortable in a new environment.

“I work as a volunteer teaching English.”