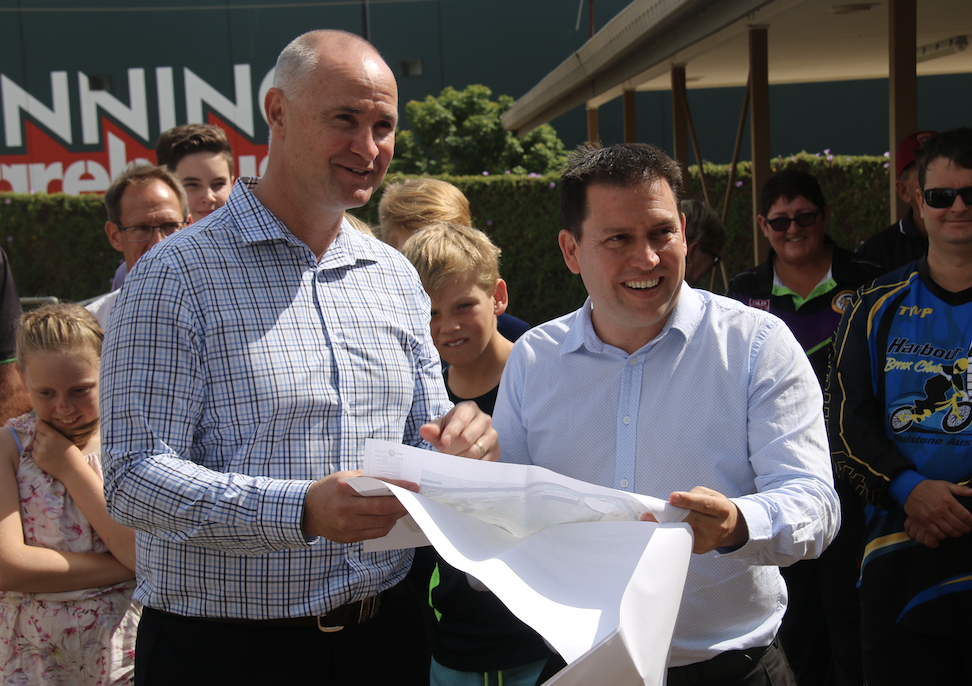 Nine infrastructure projects in the Gladstone Region will share in an almost $6 Million chunk of State Government funding over the next two years as part of the Works 4 Queensland program.

“I’m so proud to be the state member to announce another 6 million dollars for the Gladstone electorate,” Mr Butcher said.

With the sod-turning at the of the $30 Million Phillip Street community services hub earlier in the week and work beginning on a $42 Million upgrade to the Gladstone Base Hospital emergency department, Gladstone is currently awash with state and federal funds for badly needed upgrades and projects.

Glenn Butcher hopes these projects are the impetus we need to push Gladstone back on the upswing.

“The councils of Queensland have said that this Works 4 program is the best thing they’ve ever seen in the local communities,” he said in announcing the latest round of grants at Marley Brown oval last week. “Not only does it provide funding for councils to do this work, it puts jobs on the ground in local communities.”

Mr Butcher said a total of twenty extra jobs would be created by this funding round “that will see people put food on the table and a roof over their heads for their families, right here in Gladstone.”

The program is designed to help local people into jobs by providing council and community organisations with funding to upgrade or bring forward planned development in order to become more successful and sustainable.

“These projects in Gladstone will not only help the workers, it would provide opportunities for these clubs to develop, level up and hold Queensland and even national events and to bring people to Gladstone, spending their money while they’re here.”

“This program is all about jumpstarting projects and delivering jobs quickly and I’m proud that we are increasing the funding and giving councils another boost.”

“The added bonus of course, is that the funding gives council the ability to deliver important infrastructure works which will benefit the entire community now and into the future.”

What will the additional funding mean for our clubs?

Before Assistant Minister for Transport and Infrastructure, Glenn Butcher, was the member for Gladstone, he was the President of the Gladstone Rugby League Association, and it’s clear that if he and Mayor Matt Burnett had to pick a favourite among the nine projects it would be this one: a multipurpose facility will be built at the Gladstone Coal Exporters Complex (incorporating Marley Brown Oval) – to accommodate a doubling in size of the amenities, establish more adequate facilities for female rugby league players and ultimately bring NRL games to Gladstone.

“The NRL is coming to Gladstone,” Mayor Matt Burnett said. “If it’s not this year it will be eventually, we’ll just keep at them, because once they play on Marley Brown Oval they’re going to want to come back.”

“This project would have happened anyway, for our local Rugby League players and for the local competition, it is all about them,” he said. “But it will also help us to bring those A-grade games here.”

“Next year we celebrate 100 years of rugby league in the Gladstone region, what better way to celebrate than with NRL games right here at Marley Brown Oval.”

Cr. Burnett is keen to get the ball rolling: “Work needs to start tomorrow, here at Marley Brown oval, in case we get that NRL game in Round 3 or Round 5 next year. Let’s see that happening, we’re going to get that fast-tracked and get them on the road to construction.”

Glenn Butcher indicated that we could expect a visit from the Gold Coast Titans in Round 3 or Round 5 of next year’s season during a period when they are unable to play on the coast because of the 2018 Commonwealth Games.

Volunteers at Western Suburbs Waves Swimming and Triathlon Club have recently given the club a makeover, holding working bees, overhauling the garden and giving the club a fresh look. They’ve opened their arms to the community on social media as well as offering coffees and post-training breakfasts at the pool; they’ll be able to take the club even further with the $218,406 grant announced yesterday:

“There is a lot to be done,” Siddi Furness from the club said. “The facility has become a little neglected, a lot of essential maintenance is needed.”

The Works 4 Queensland funds awarded to council will be spent on upgrades improving accessibility for people wanting to do pool-based rehabilitation; solar power will be installed to reduce the club’s carbon footprint (and power bill); and obsolete equipment will be removed and replaced.

“You know I don’t think people are aware, but we have a large number of people in the club who are national class, even world level athletes in swimming and in triathalon,” club president Mark Spearing said.

“All from that little 25-meter pool on Glenlyon Road. And now it’s getting a world-class upgrade. Isn’t it unreal?”

The club secretary of the Calliope Roosters Junior Rugby League, Shannyn Ind, said the $800,000 funding awarded to council to construct a multi-purpose facility at Bunting Park is exactly what the club and the community need.

“It happens quite often, that we are asked to host competitions, but we simply do not have the facilities.”

“Everything the club had planned, this has speeded it up by years. It would have taken us years and years to get to this point,” she said.

At the moment, the only facilities suitable for holding Queensland BMX Championships are in Brisbane and Cairns.

This is set to change with the Works 4 Queensland funding awarded to the Gladstone club yesterday. The $348,000 grant will pay for a major track upgrade, a 5-meter starting hill, extra length, turns and lighting, bringing the track up to Qld championship standard. Poor drainage on the track will be remedied, the toilet block, canteen and registration building upgraded, and improvements to access will be made, including building culverts through a creek crossing.

The remainder of the nine projects include: