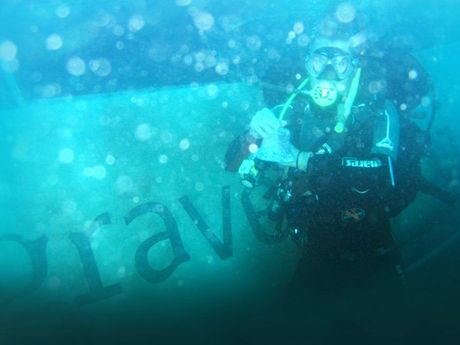 Posted at 16:42h in Community, Local, News by News 0 Comments

Local man Mark Mergard and fellow divers found the wreck of the Spirit of 1770 last weekend and captured incredible underwater footage showing the extent of the fire that sunk the tourist vessel.

The aluminium vessel caught fire on May 11 on its way home from Lady Musgrave Island. Initial reports said the fire started in the engine room. There were 42 tourists on board who had to abandon ship and swim to life rafts before they could be rescued by nearby fishing boats.

Mark and his wife Katrina were concerned for the marine environment if the boat was left unsalvaged. The search from Marine Parks and other teams continued they decided to enlist the help of Captain Brett Divine and experienced salvage expert and a team of divers to locae it’s whereabouts.

After an hour-long search they saw what looked like a vessel on the ocean floor on sonar about 14 nautical miles from Seventeen Seventy.

They said it was unbelievable, they thought they might have found it but needed to dive down and check. They had out the anchor right on top of it. They shoot footage that shows how the intense heat of the blaze burnt massive holes in the catamaran and melted metal which caused roofs and decks to collapse.

He said at first they couldn’t see anything but as they swam deeper they saw a massive structure sitting on the sandy ocean floor at a depth of 38m.

Mr Mergard said. “We were lucky to find it. “It’s a big ocean out there.”

The good news for the reef and tourism is that there is very little environmental damage.

The town has been quiet with less tourism coming in for the popular tour. Mark said he had been offered some money from a Network Television group for the footage and although it was a small amount he would donate it to the local tourism board, DCTC.