Three $5k Barramundi up for grabs! 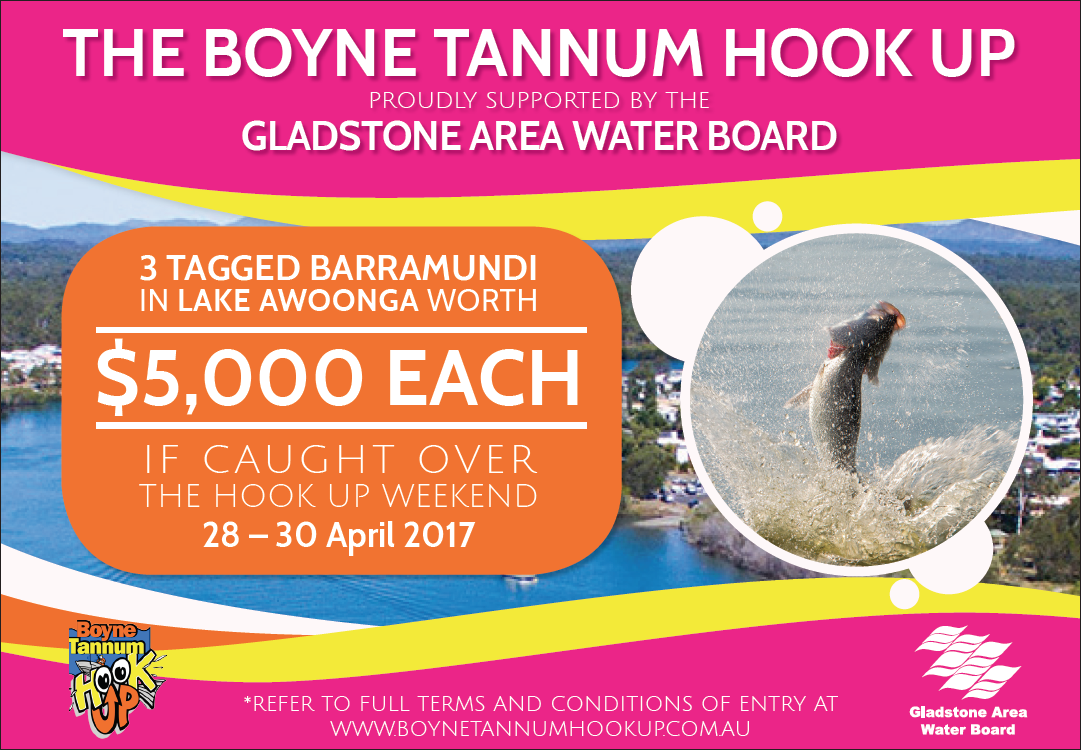 Posted at 12:20h in More Articles by News 0 Comments

Three tagged Barramundi worth $5,000 each will be up for grabs as part of the 2017 Boyne Tannum Hook Up (BTHU).

The Gladstone Area Water Board (GAWB) today announced it had partnered with the BTHU to sponsor the Tagged Fish Category.

GAWB Operations and Maintenance Manager, Sarah Lunau, said three adult Barramundi would be caught from Lake Awoonga over the coming weeks and be fitted with a special BTHU tag before being released back into the Lake in time for the Hook Up.

“If caught over the Hook Up weekend by a registered angler, each Barramundi is worth $5,000,” Ms Lunau said.

“For GAWB, this is the perfect partnership, because, like the Hook Up team, we want to promote sustainable recreational fishing within the region.

“We have Hook Up anglers fish the Lake every year, but this year there will be an extra incentive with those three prize fish up for grabs.

“I look forward to seeing plenty of anglers on and around the Lake at the end of the month”.

BTHU Vice President, Pat Laws, said the tagged Barramundi must be presented under the BTHU live category rules and the tag checked by the officials to claim the $5,000 prize money.

“We’ve had the tagged fish category for a number of years now but this is the first time anglers have known where they are located which is quite exciting,” Mr Laws said.

In conjunction with the announcement, the Hook Up team were on site at Lake Awoonga this morning to test drive the Hook Up prize boat while assisting GAWB release Barramundi fingerlings into the Lake.

Mr Laws said they had just taken delivery of the first prize boat, valued at $65,000.

“Thanks to our friends at Sea Jay, we’ve just taken delivery of a 5.5m aluminium Trojan with a Yamaha 150hp 4 stroke outboard.

“It’s fitted out with Garmin electronics, trailer and safety gear and valued at $65,000.

“The Hook Up Team had a great time giving it a test run on Lake Awoonga this morning and I’m sure the lucky winner will have years of enjoyment ahead of them.

Approximately 1,000 Barramundi fingerlings were released into the Lake this morning as part of GAWBs restocking program.

“As part of our environmental licence, we stock mainly Barramundi but also a small numbers of Mullet and Mangrove Jack into the Lake,” Ms Lunau said.

“Our data shows that Lake Awoonga serves as a great ‘nursery’ for the fingerlings, with recaptures demonstrating above average growth rates”.

Ms Lunau said there is always a lot of concern about Barramundi going over the dam wall when it spills but assured anglers the recent event was not significant compared to 2013.

“Unfortunately, in 2013 when water levels reached 8m above the dam wall, we lost many more fish down the Boyne River. The recent rain event was not significant in comparison”.

The 2017 BTHU will run from Friday 28 to Sunday 30 April 2017. Tickets are available at www.boyntannumhookp.com.au or at Pat’s Tackleworld Gladstone, LJ’s Complete Angler Gladstone or Boyne Bait and Tackle.