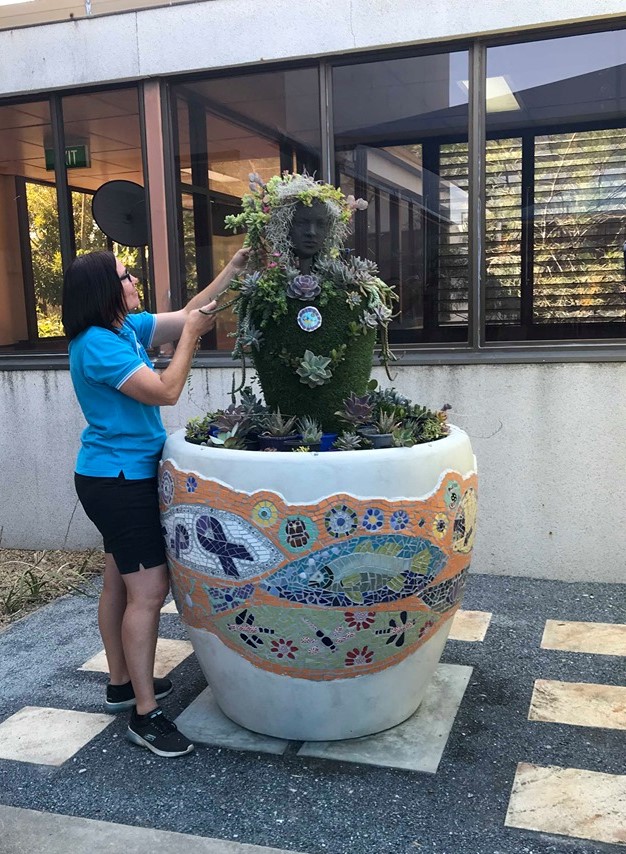 On Tuesday 6th November, the Aunty Project at Gladstone Hospital was officially completed, raising awareness and sparking conversations about domestic violence. Aunty is a mosaic sculpture decorated with succulent plants to form a woman who serves as a symbolic figure of care, assistance and hope. The artwork was designed to increase awareness and inspire conversations about domestic and family violence, and how the community can come together to better support those who are affected.

Aunty took three months to complete and was constructed with donations from the Gladstone hospital staff, carers, patients, sponsors and the community. One of the most striking features of Aunty is the mosaic pieces, some of which are made from tea cups and coffee cups that were accidentally broken and brought in to be repurposed in the art project.

Coordinator of the Aunty Project, Katrina Elliott, said Aunty inspires hope as the many different pieces, including the broken cups, are put together to make something beautiful again. Katrina has completed many art projects throughout the hospital, and believes that artworks like Aunty gives visitors, carers, patients and staff something interesting to look at while they visit the courtyard. In this case, it also creates awareness and triggers much-needed conversations as people begin to talk about the artwork and what it stands for.

Gladstone Patrol Group Domestic & Family Violence Coordinator within the Capricornia Police District, Sergeant Vicki Dredge, attended on the day providing other attendees with support cards and contact numbers for assistance with domestic and family violence.  She encouraged those who were affected by domestic and family violence to reach out and reminded us all, with regards to Aunty, that “out of something broken, something beautiful can grow.”

You can find Aunty in the courtyard near emergency at the Gladstone Hospital.