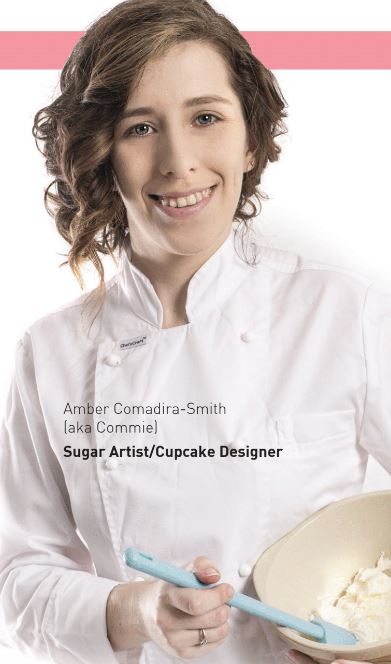 Posted at 14:26h in Lifestyle by sales@gladstonenews.com.au 0 Comments

What began as a hobby for Gladstone graphic designer Amber Comadira-Smith, has taken her to the ‘Oscars of the cake-decorating world’ with her business Commie’s Cupcakes nominated as a finalist in the cupcake category of the Cake Master awards.

Cake Master magazine (or “Cake” as it is known in Australia) is just one of a series of international magazines that have featured Amber’s work: she has also featured recently in American Cake Decorating, and Cake and Sugarcraft.

“To be honest, I didn’t know I was nominated. I saw the nominations go up, and I thought “Oh, I’ll just skip it this year, and I didn’t really mind. Then I got an e-mail in big bold letters telling me I was a finalist,” she said.

Nominated by an anonymous and obviously happy customer, Commie’s Cupcakes are very on-trend.

Working in fondant, she creates miniature cake toppers of practically anything you can imagine (food, flowers, animals, shapes) remarkable in their detail, before placing them on the cake. As a trained graphic designer, she says she enjoys the small canvas of a cupcake compelling her to think creatively.

Definite winners in the social media revolution unfolding over the last decade, millions of Instagram, Pinterest and Facebook posts have been devoted to ever more beautiful looking cupcakes. “Owning a cupcake bakery” was recently named by an expert at Vogue magazine as “the career fantasy of our times”.

The desire of home cooks to replicate these creations is fuelling Amber’s business, and she has stepped away from catering and classes to exclusively teaching cupcake decorating, in-person and virtually, via a series of YouTube and online tutorials.

“The classes that I offer here are very beginner and basic, but there’s a class I have developed which is for hobby cake decorators, people who have worked with fondant before but haven’t really explored it,” she said.

“Cake decorating classes can be limiting because so much time is spent preparing the cake. And because it is so big, you might only learn one decorating technique,” she said.

“I’ve based this class on some signature cupcakes I have called “Geometric Jungle”. Every cake can have a different design, so you can learn quite a few things in that one session,” she said.

If you want to learn amazing cupcake skills check out Amber’s Facebook page.