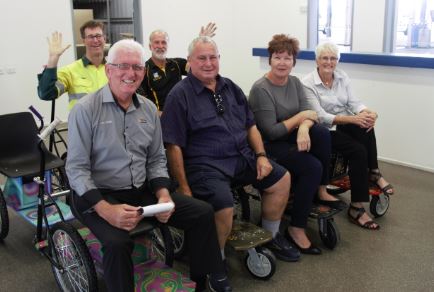 Posted at 13:10h in More Articles by News 0 Comments

Here at Gladstone News we always try to find the positive side of the news and to spotlight all the great things that are achieved in our community by good people every day.

This month we will feature four community leaders in our “Feel Good February” Feature. These men and women have shown a level of generosity and service to the local area shaping it into the ‘town with a big heart’ that we know Gladstone to be.

We met Greg Klease at the former Reef City Ford showroom which he has recently given over to the Sunrise Rotary Club’s Bikes to Wheelchairs project and talked about his philosophy of giving back:

“We’ve currently got it listed for sale or lease and while it’s just sitting here empty we thought it was a great idea. I said you can use the previous spare parts area to continue the wheelchairs,” he said.

“Behind that shed, there are six trailers belonging to Blaze Aid – who repair fences for primary producers after floods or fire – we’re doing that free of charge for them too because they’re all good people,” Greg continued.

“As long as it’s a non-profit organisation I’m happy to help out because I believe when you have success in life you’ve got to put back. You have to put back into the community.”

Greg has a long history of volunteering in the Gladstone region both before and after his retirement from paid work: “I was twenty-five years with VMR where I worked my way up to be the deputy chief of the patrol, I’ve been involved with the Salvation Army Red Shield Appeal for 15 years and just helped with fundraising since 1988 since I moved here from Emerald,” he said.

“People who retire and say they’re bored, they ought to get involved with the community because there are so many places where you can help,” Greg said.

“I remember being a young guy in Biloela back in the 1960s and there were people in business who saw things in me that I couldn’t see, so they gave me a chance.”

“I’ve always worked on the theory when I got old enough I would give other people a hand. Pass it on.”

“I’ve never asked for any of the attention but awards have always prompted me to do more because I think doing good is contagious. It rubs off on the people around you,”