Gladstone is continuing to lead the way in industry advancements 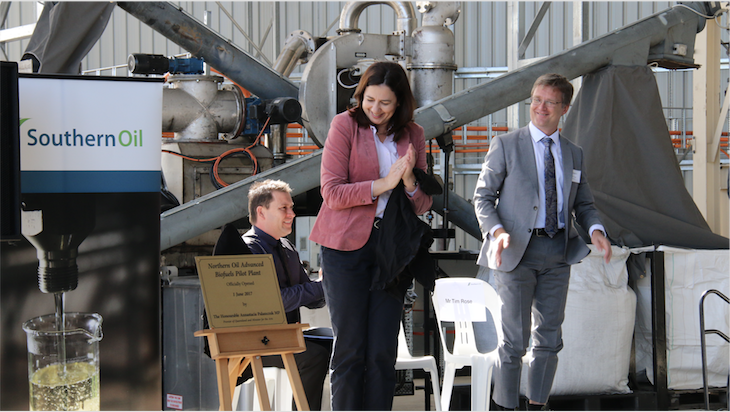 Posted at 15:52h in More Articles by sales@gladstonenews.com.au 0 Comments

The $18 million Northern Oil Advanced Biofuels Pilot Plant (NOABPP) was opened just 14 months after the project was announced by the Premier.

Southern Oil Managing Director Tim Rose said that, together with a $5.3 million biocrude and biofuel laboratory which opened on site last December, the NOABPP was a game changer for Queensland and would be a significant economic and employment contributor to the region.

“Over the next three years, this pilot plant aims to produce one million litres of fuel for use in field trials by the US Navy as part of its Great Green Fleet initiative, by the Australian Defence Force for the Navy, by Australian heavy road transport operators, and for the Australian agricultural and aviation sectors,” Mr Rose said.

“The rubber is literally hitting the road in Gladstone with used mining and passenger tyres some of the first waste streams to be trialed,” he said.

Other waste streams to be tested include plastics, wood waste, Prickly Acacia, sugar cane trash and bagasse, urban and a variety of agricultural green waste including macadamia shells.

“What we are doing here is a step beyond the old adage that ‘one person’s trash is another person’s treasure’.

Mayor Matt Burnett attended the official opening alongside a number of councilors.

“Here we have one of the most exciting things happening, not just in Queensland, but right around the country, right here in Gladstone.”

“This is the greatest place in the world, and here we are showing the world how to create bio-diesel,” he said.

Gladstone businesses can look forward to having access to the bio-diesel to run heavy vehicles and machinery in the near future.

While other biofuels raise concerns for not being of the same quality as a diesel derived from fossil fuels, Southern Oil Managing Director Tim Rose said that the Biofuel being produced here in Gladstone is of no less quality than traditional diesel.

“That’s where we started, there was no point in making a biofuel that wasn’t going to be of the same quality of other diesel.”

While it’s exciting to be presenting such advancements on a world-wide scale, Gladstone locals will have access to the bio-diesel also.

“It’s very important to us to give the businesses in Gladstone access to the bio-fuel also, and at the exact same price point as other diesel,” Rose said.