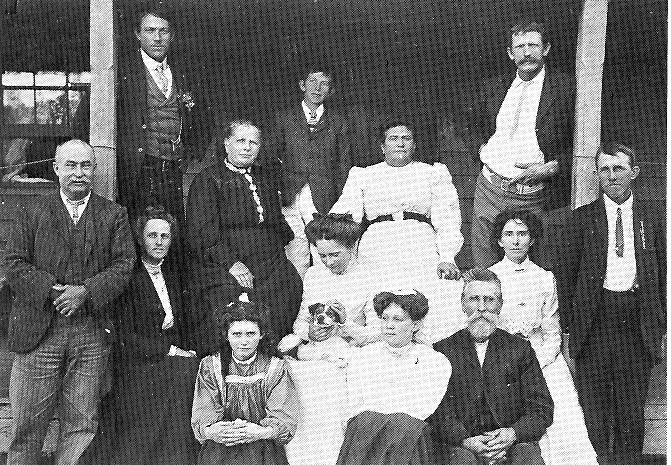 17 May LOCAL HISTORY WITH BETTY LAVER – THE MURPHY FAMILY

In 1863 James and Elizabeth Murphy arrived in Rockhampton after migrating from Ireland. They had their daughter Charlotte with them and a son, William, was born at Liverpool on the voyage out. James found employment as a shepherd with William Young at Mt Larcom Station and the family moved into the shepherd’s camp. This was situated on the southern side of Larcom Creek known as the Two-Mile and was not far from the Euroa homestead. James continued as a shepherd and, in 1876, some of Mt Larcom station was reclaimed for closer settlement. James purchased a block of land and named his new property Bailee, after where he and Elizabeth had been married. James and Elizabeth went on to have fourteen children and two died as infants and were buried near the old Mt Larcom Homestead. Six boys and six girls lived to maturity and most stayed and lived their lives out in the Mt Larcom area. In 1881 James began negotiations with the Education Department for a school to tutor the older children. By the end of that year, they were successful in establishing a school at Bailee Farm and the enrolment was five Murphy children and the George Davis’ children. The Murphy family established a bush Inn or coach house, as this was the halfway stop between Clyde Creek (west of Gladstone) and Parson’s Inn near Raglan. The coach was the only public conveyance from Gladstone to Rockhampton and George, Jack and Dave Williams operated this facility.  As time went on, more families came to the area to settle or to chase gold and the Murphy’s expanded their business to include a Post Office, a General Store and a Butcher Shop. James also liked prospecting and Elizabeth baked bread in a colonial oven and churned butter in a wooden barrel. She put her goods on sale in the store. With no refrigeration in this era, Elizabeth had a unique way to keep the butter cool.  She would pack it into waterproof containers and lower it into the cool water of the nearby well. They delivered groceries and meat to the area and when the prospectors were at Sneaker’s Gully, they would deliver as far as Butlerville. By the turn of the century, James extended his acreage and, when the railway came through in 1905, closer settlement came about in the whole area. Dairying became viable for all the settlers and they sent cream to the Gladstone Butter Factory. James established a larger dairy and for another sideline had a small flock of sheep. He shore these for wool, but it also gave them the occasional piece of mutton for the table. Fodder was a necessity for the cattle and James prospered with his modern ideas when he purchased horse-drawn haymaking machinery and a chaff-cutter. James and Elizabeth left Bailee Farm and retired into Gladstone in 1915. They enjoyed retirement for a few years, but James passed away in 1917 and Elizabeth in 1920.