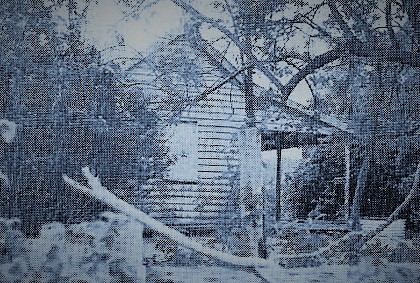 William Trevelyan (Bill) Wyndham migrated to Australia from England in 1850 when he was twenty years of age. By 1888 he had found his way to Boyne Island and bought land off an original settler Charles Hedley. Bill called his property Carnym, supposedly an Aboriginal name meaning “sand”. From the 1880’s, fruit growing became one of the main happenings on the island and Bill toiled enthusiastically to create a large orchard. A government report of the day describes that he had established a fully fenced eight-acre orchard. It contained 500 pineapples, thirty-six grafted orange trees, an acre of bananas and a quarter of an acre of a nursery garden that was filled with rare plants and trees. It is believed that the first pineapples planted, and the rare plants and trees were brought out from Kew Gardens in England. Bill later sent some of his Boyne Island grown plants back to Kew Gardens. The different varieties of seeds of the magnificent mango trees that he grew at Boyne Island were exported to India. Pineapples were grown by three generations of the Wyndham family on the island. Bill passed away in 1898 and he was buried in the orchard that he had so lovingly cared for. After his death, his daughter Bessie took up residence on the island and she employed Billy Yow Yeh (a Kanaka) as a property hand. Later Bessie relocated Bill’s grave to the ridge crest on the north-west of the property and she had a huge granite boulder shipped from Magnetic Island to mark his resting place. This boulder weighted 1.5 tons and was hauled to this site by a bullock team. The Wyndham’s land remained in the family until 1972 when it was bought by Comalco Ltd as part of the Smelter site.