Rookie of the Year comes home to Gladstone 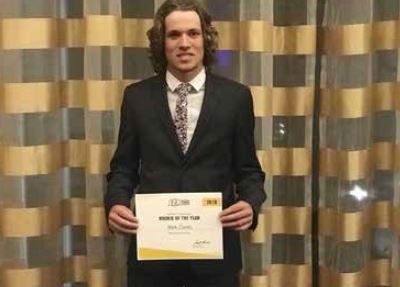 01 Jun Rookie of the Year comes home to Gladstone

Posted at 16:27h in More Articles by News 0 Comments

Gladstone tennis star Nathan Cooke is home for the summer vacation after a stunning first year of his college tennis scholarship in Fulton Missouri.

Named the National Association of Intercollegiate Athletics Tennis Rookie of the Year and seeing the ranking of his college, William Woods University, rise from 12th in the country to sixth, Nathan is modest: “I’m not sure how many colleges are in the NAIA, but basically of everybody who started college tennis this year, I was the top seed.

For your information, there are 249 colleges associated with the NAIA and William Woods is known for the strength of its tennis program:

“We played nationals and my college made the quarter finals. In the post-season rankings we’re ranked sixth in America,” Nathan said.

“That’s why I joined them because their tennis program is so good,” he said.

“When I came on board they were ranked 12th so to get up to 6th – it’s basically a fifty per cent improvement in a year.”

Nathan, who will be joined in the USA this year by another local tennis player, Matthew Ridden, said it’s not the Gladstone Factor explaining the improvement:

“I’m Australian, but there’s two guys on the team from Spain, one from Scotland, a couple from Argentina, and one each from Mexico, Brazil, South Africa and Canada. We’ve only got one American in our team of 14 people.

“There’s a lot of people from all over the world. Plenty of places to visit when I go backpacking,” he said.

Nathan needs to keep his hand in during his vacation and will be taking on the Gladstone Open Age Silver Series AMT this weekend, June 1-3, at Gladstone Tennis and Squash on Glenlyon Road.