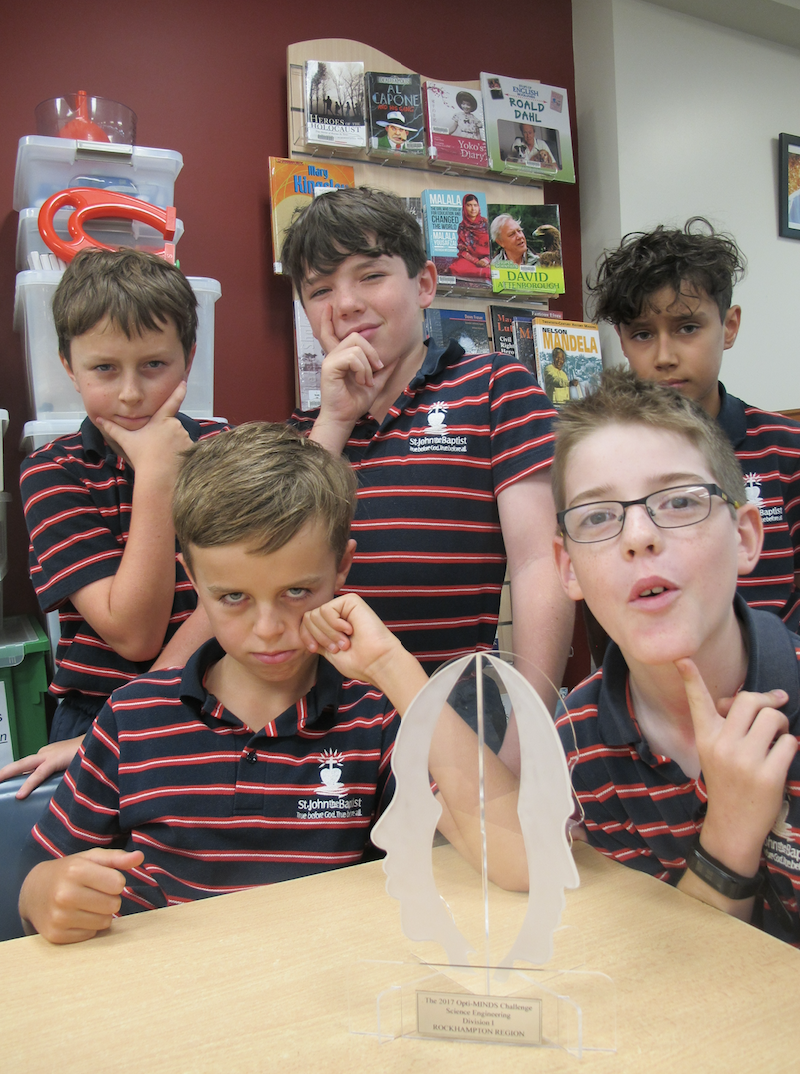 Posted at 14:55h in More Articles by sales@gladstonenews.com.au 0 Comments

Not even a middle-of-the-night fire alarm, dragging from their hotel beds before the comp could stop the team from St John’s Catholic Primary School ‘smashing’ the creative intelligence challenges at the Opti-MINDS state championships held recently in Brisbane.

Already regional champions in the category Science and Engineering topping the judges list in the final in Rockhampton last month, the six boys: Hayden Maudsley, Kobi Crocker, Liam Morris, Joey James, Jacob Taylor and Lucas Gifford travelled together to Brisbane to hone their skills in the Creative Sustainability Challenge held at the University of Queensland’s St Lucia campus.

Working both on long-term and spontaneous assignments lasting first three-hours then ten-minutes, the team had some nail-biting moments resolving technical difficulties as they solved demanding, open-ended challenges from their category Science and Engineering.

“They have to explore ideas as a team, choose the best idea and expand on the ideas and come up with the best solution to a challenge,” the team’s coach Melissa McBride from St John’s said.

Expanding on their project, the boys explored ideas and techniques such as object recognition, a ‘Raspberry PI’ device, pulley systems and wind-tunnels. Interpersonal skills are also developed as teams work together and present their ideas to a large audience.

“We had to practice teamwork and listening and not shouting at each other,” Jacob Taylor said.

Dubbed “an inclusive team challenge which empowers participants to think, create and communicate”, Opti-Minds attracts teams from all over the state including many from our own region.