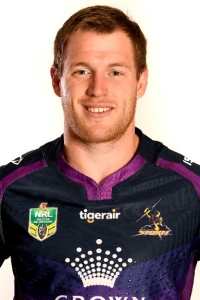 Posted at 13:05h in More Articles by sales@gladstonenews.com.au 0 Comments

Rockhampton local Tim Glasby once thought his career was over a now have been selected as part of the QLD State of Origin team for game 3. After finishing his degree as a financial planner in 2012 Glasby was working full time as well as playing for the Capras. “I was enjoying life” he said “the Capras was fun. But I always had the attitude I wanted to play at the highest level I could get to.”

Tim Glasby had already played with Penrith in the Under-20s hoping it would lead to first grade football. However, this was not the case and moved back to central Queensland and joined the Capras. “I gave it a good old crack, so I was very happy when the call from the Storm came, offering me a contract,” he said.

Moving to Melbourne in 2013 Glasby said he had some security having a two-year contract but also had a great job to return to if I didn’t work out. He played in the Storm’s feeder team, Brisbane’s Easts Tigers, for a few months. Then in round 16 of the NRL he made his debut in a losing side against Wests Tigers at Leichhardt Oval.

Glasby thanked the Storm coach Craig Bellemy saying “I certainly wouldn’t be here if it wasn’t for him”. Glasby never made any of the Queensland age teams and was picked for Queensland residents a few years ago, but now is heading for origin. He said it was something he always hoped to do. “I’ve been in the Emerging Maroons squad the last few years so I hoped the call might come eventually”.

After being criticized about his stats Glasby says “Footy is not all about stats. Stats tell a bit of a story but not about all that goes on behind the scenes”. Despite this criticism Rockhampton and central Queensland are very proud of their local lad.